Croatia is one of the biggest and best tourist destinations in the world right now, thanks in no small part to Game of Thrones. Both King’s Landing and the city of Meereen have their filming locations in Dubrovnik Old Town and Split. And if you’re a fan of the show then you know why everyone’s visiting Croatia right now. It’s a gorgeous country that blends untouched medieval European architecture with astonishing natural splendour. Photo by David Boca on Unsplash

One Day in Zagreb

Where else to start 7 days in Croatia but in the capital of Zagreb? It used to be a place people skipped over but Zagreb is now seeing its fair share of tourism; it’s most people’s arrival point and a wonderful place to get stuck into Croatia’s history and way of life. It’s a city worth getting lost in with a mix of classic Austro-Hungarian, medieval, and modern, brutalist architecture culminating at the Ban Jelacic main city square.

Make the most of the city by taking a free walking tour. Zagreb from above is pretty special so head to the top of Zagreb 360 or the Lotrščak Tower and catch the view. The city is known for having some pretty quirky museums including the Museum of Broken Relationships. The coffee scene in Zagreb has been making waves so make sure you do a bit of cafe hopping between sight-seeing.

the best accommodation in zagreb Photo by Milada Vigerova on Unsplash

The UNESCO World Heritage site Plitvice Lakes is a perfect stopover on the way from Zagreb to Split. It’s one of Croatia’s number one tourist attractions and a must when visiting Croatia. Just be prepared to experience not only one of the most stunning spots in the country, but in all of Europe. Croatia is far more than just perfectly maintained medieval cities that make for perfect fantasy TV settings. It’s also a land of untouched and varied natural beauty: lakes, rolling hills, and mountains can all be found in the endlessly expansive national parks, and Plitvice Lakes is the best of the bunch. Sixteen lakes set in thick, green woodland with an abundance of wildlife and flora to get joyously lost in.

The lakes are interconnected by varied waterfalls, each of them worth tracking down and photographing, making this 300km national park truly spectacular. No, you won’t see it all, but there’s more than enough lakes, waterfalls, and wild forest to lose yourself in for an entire day. Don’t leave Plitvice Lakes off your list for your Croatia holiday. Just bear in mind that there’s a 55 Kuna entrance fee to the park and that they’re open all year with later opening times in the summer.

the best accommodation in the area Photo by Spencer Davis on Unsplash

Croatia’s second-largest city is a dream to explore, Split was largely untouched by the war so it is one of the most well-preserved cities in Croatia. A city lost in time its historic city center is dominated by the Roman Diocletian’s Palace, A UNESCO listed site dating back to the 4th century. The palace was used for filming Game of Thrones, amongst other things, and it’s not hard to see why with incredible preserved Roman streets surrounding it.

After you’ve wandered the palace head over to Marmont Street where you’ll find Venetian architecture and cafes and restaurants to while away some hours by the waterside. The palace is the very start of the stunning architecture to explore in Split, honestly, you could spend your 7 days in Croatia here – don’t miss sights like Split’s cathedral, Campanile bell tower, or the plazas like Pjaca square and Fruit Square. In the evening, head over to the lively Riva for a walk on the promenade, enjoy the street food and watch the street performers.  I highly recommend doing a walking tour of Split when you’re there!

the best accommodation in split A majorly busy location these days, partly due to the Game of Thrones series bringing the medieval walled city to people’s attention. No Croatia holiday would be complete without a visit to the enchanting Dubrovnik, a UNESCO World Heritage Site, home to 60,000 people, set on the coast of the Adriatic Sea. Make sure you take a walk along the city walls, wander the old town and catch some of the main sights such as the Dubrovnik Cathedral, Palace Knezev Dvor, and  Palace Sponza. Once you’re finished sightseeing, settle in one of the quaint cafes or Italian restaurants and absorb the atmosphere of beautiful Dubrovnik.

the best accommodation in Dubrovnik The Island of Lokrum – A Day Trip From Dubrovnik

While you’re in Dubrovnik Old Town, you’ll likely spy a large, heavily forested island just across the water. This mysterious island, cut off from the heavily populated mainland, is Lokrum Island. It looks so strange and tempting; you’re guaranteed to want to swim across and explore it. Well, don’t do that, because you can take a ferry. Lokrum Island isn’t quite as dense as it initially appears, and there’s enough to do on the island to fill up a day of exciting exploration. You can start with the gardens, which are home to various strange and exotic plants from across the world as well as some beautiful peacocks.

Since Croatia is a summer paradise, you’ll probably be visiting in the warm season and that means swimming and snorkelling in the waters around this little island, as well as sunbathing on its beaches. There’s also the Benedictine Monastery atop Lokrum Island’s hill. The monastery is an incredible medieval structure that was built hundreds of years ago and yet, like all of Dubrovnik Old Town, remains in miraculously good condition. If you’re wondering if you can get food on the island, yes, there are a few sandwich bars to keep you fuelled up as you explore the gardens, beaches, and the monastery. A perfect end to your Croatia holiday.

There’s how to spend 7 days in Croatia!  Are you planning a trip to Croatia?  Tell me below. 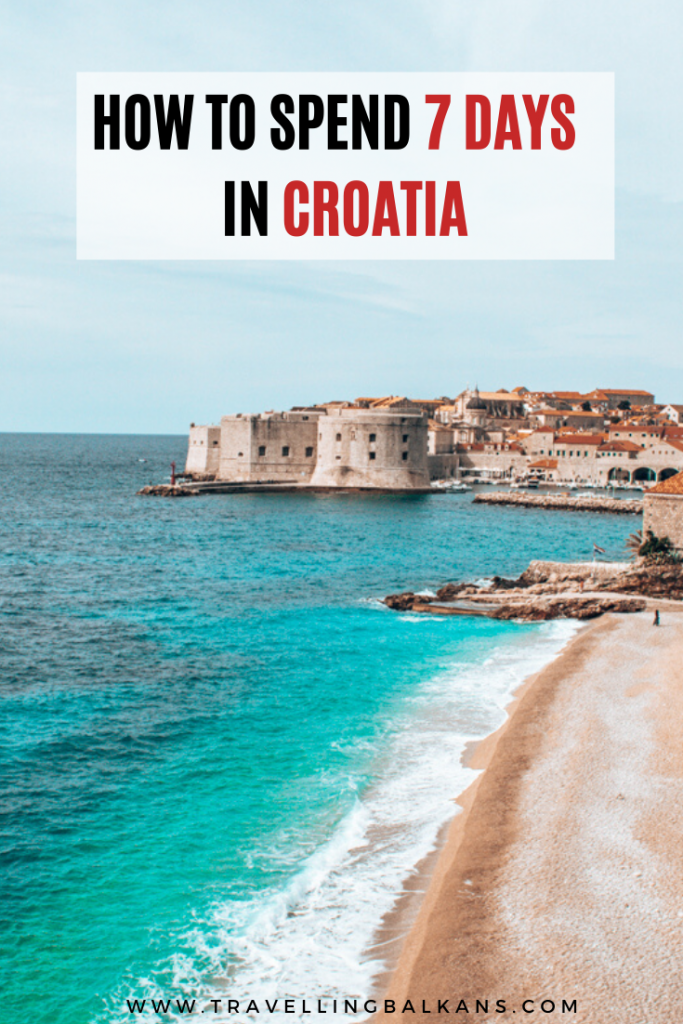 8 Things to do in Theth, Albania